Read the FAQ and still not sure about something? Want to shift faster? Post here.
Post Reply
25 posts

Ewilon1988 wrote:Yeah I'm not really driving quite a bit. I went and interviewed for a job today that's an extra 25 miles away from me but it's through New Orleans so it's a lot of stop and go and red lights so I think that's where the anxiety is setting in. If I get the job I'll have to make that kind of commute daily.

Worry about it not. My brother is the definition of abusive and the last car he had with a manual died with 250k on the clock (120k of which were his in 6 years). He never bothered with smoothness or being unabusive, or even trying to revmatch.

These are the stories that I love hearing because I too have a bit of anxiety and wondering what kind of condition I'm in also. My commute didn't greatly increase in terms of mileage (only about 2-3 miles added each way to what I was originally doing for years) but my door to door and traffic conditions greatly changed. I pretty much doubled over my door to door and I've been shuffling 1st and 2nd gear the most I've ever with this car. I rarely have any stints where I can break 25 mph for longer then 3 seconds and these are highways that are speed limited to 55 but during normal hours have people regularly going 65-70. If I had any anxiety about driving stick before, it's surely subsided now.

These stories are making me feel better too. While I'm still working on smoothness, so long as I keep my takeoff RPMs low, I will stop wondering "is this going to #@&* up the clutch."
Top

The way I see it is that clutches are wearable parts; they're designed to be replaced. They're not terribly difficult to replace either. As Cow is wont to say, and I'm paraphrasing here, as you learn you'll get better; if the clutch fails due to learning there is something more amiss than a mere learning curve. Even if a clutch wears out prematurely it's likely to happen after you've gotten rid of it. Also, clutches seem to get an undue amount of thought when first learning.

Don't worry about it too much. You're developing better skills whether you realize it or not and a clutch can dissipate the heat of a hard launch fairly quickly in regular driving; heat is the real killer. Think about how long the clutch gets to chill during regular driving.
17 Mazda6 Touring
18 Mazda3 iSport

InlinePaul wrote:The driving force of new fangled features to sell more cars [is to] cater to the masses' abject laziness!

Good wording tankin, it's great to read stuff like that. It eases the mind ya know
Top

Teamwork wrote:These are the stories that I love hearing because I too have a bit of anxiety and wondering what kind of condition I'm in also

Teamwork, you've probably seen this story before, but here it is again in case:
Consider my 1980 Buick Lesabre.

In 2010, completely unqualified and devoid of the finances with which to do such a job, I converted it from 3 speed automatic to 5 speed manual. The NWC T5 transmission that I put in was, depending on who you ask, either severely too weak or marginally so. The only flywheel I could find, from an antique Jeep, was very large; and the best clutch that would work with the transmission was very small, definitely too small for my engine (and mismatched with the flywheel!). I never expected to burn a full tank of gas before crumbling the transmission to bits and wearing the clutch down to nothing.

In fact it just kept working and I quickly ceased to care about babying it, getting to where I was happy to beat the hell out of it any time I felt like it. I still wouldn't say I drove like a 17 year old douchecanoe, but when you consider the hacked together mismatched underspecified system the effect must have been even worse than that would be in a normal car.

Over the next ~4 1/2 years I put 90,000 miles on it until it was all pretty wonky. I decided to replace the transmission and clutch. When I took it all apart, I found these failures:
1. Pilot bushing worn down to nothing.
2. Clutch not visibly worn too much, but delaminated. Release bearing still good.
3. Transmission-to-bellhousing bolts missing/loose...the dang transmission was about ready to roll away from the car.
4. Input shaft bearing maladjusted or worn or something, I never did open it up and autopsy it...it's still sitting at the bottom of my to-do list.

Think about that. 90,000 miles of moderate abuse on an undersized clutch in a hacked system, and no materialization of the two big worries that people have (clutch wear and release bearing). The only clutch problem was that I beat on it until it delaminated or the rivets broke or whatever, which you guys are NOT going to accomplish in an OEM system unless you flog the everliving hell out of it.

I proceeded to reassemble the car with another transmission and an even smaller slightly used clutch disc. Works fine.

Bottom: Old delaminated clutch disc friction material.
Middle: The rest of that disc.
Top: Slightly used, undamaged, smaller clutch disc that I put in.
In front of the discs: New pilot bushing next to the sliver of old pilot bushing that I had to chisel out. 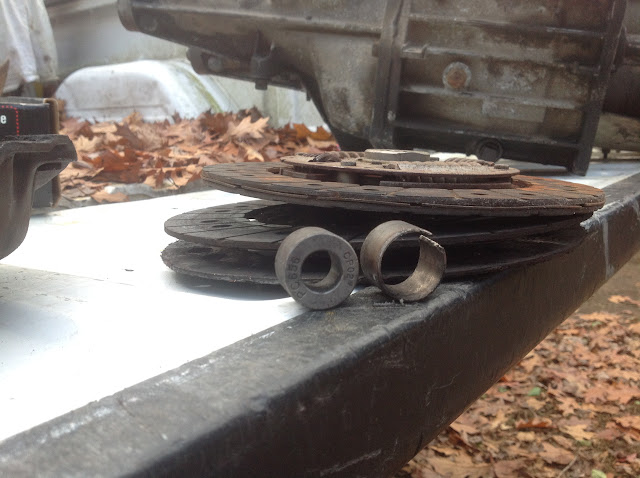 Damn cow! Seeing that definitely puts things Into perspective. I guess when you're learning how to drive a standard you stress over it, it's natural. Hearing you guys say it's going to be fine really helps out tremendously. I love this website
Top

I would call that as much reassuring as one could provide Cow. Haha, I don't really ponder it too much but I do have the occasional sloppy shift day and wonder but they are really fewer and further between now. When I was really new here and I basically expressed how everyone on the internet would say they shift and operate a manual a different way and always confirm there stance by saying "well my original clutch lasted 150k" as the back up. I'm guessing more or less that this thing could really take some abuse.
Top

Teamwork wrote:When I was really new here and I basically expressed how everyone on the internet would say they shift and operate a manual a different way and always confirm there stance by saying "well my original clutch lasted 150k" as the back up.

Driving Amish is like a religion - there are many sects and they all think theirs is the one that will take you to Hebbin.
'08 Jeep Liberty 6-Speed MT - "Last of the Mohicans"
Top

Rope-Pusher wrote:Driving Amish is like a religion - there are many sects and they all think theirs is the one that will take you to Hebbin.

Rope-Pusher wrote:Driving Amish is like a religion - there are many sects and they all think theirs is the one that will take you to Hebbin.