All Those Hours Playing Forza Pay Off

Read the FAQ and still not sure about something? Want to shift faster? Post here.
Post Reply
17 posts

All Those Hours Playing Forza Pay Off

An 18-year-old Canadian teenager turned in a dazzling performance in the SRT Viper Cup Series season opener this past weekend at Road Atlanta in Braselton, Ga.
Louis-Philippe (nicknamed LP) Montour won the opening event on Saturday and added an impressive win in Sunday’s second race. It was the beginning of the fourth season of Viper Cup action, which features the SRT-designed Viper ACR-X—a special-edition model of America’s ultimate sports car.

18-year-old Louis-Philippe “LP” Montour drove the SRT-designed Viper ACR-X to victories at Road Atlanta in Braselton, Ga., last weekend.
The Canadian driver was the overall winner on Sunday, edging competitors in the GT-U, GT-1 and GT-2 classes as well as his SRT Viper Cup Series foes—all on the track at the same time. With the two race wins, Montour leads Dan Knox by 21 points (131-110) in the early season standings.
Sanctioned by the North American Road Racing Association (NARRA), the SRT Viper Cup Series in 2013 will run as a distinct class within the NARRA USGTC races. In addition to Road Atlanta, other venues are Watkins Glen (N.Y.) International (May 3-5), New Jersey Motorsports Park (June 7-9), Pittsburg International Race Complex (Aug. 16-18), Virginia International Raceway (Oct. 2-5) and Sebring International Raceway (Nov. 22-24).
Each venue will host two races during the weekend. The American Le Mans Series also will be competing at the 3.27-mile Virginia road course during the same weekend.
“There’s no better way to start the 2013 SRT Viper Cup season than by seeing a young driver perform so impressively,” SRT Motorsports Racing Manager Gary Johnson said. “We couldn’t be more proud of LP and what he did on the track this weekend.

It didn't mention that he played Forza. Where did you see it?

Hahaha I get it. Because he's so young. Must have gotten his skills from Forza LOL

...And his season in the sun continues:

An 18-year-old from Saint-Donat, Quebec, in only his second season of competition, extended his winning streak to four in SRT Viper Cup Series races with a pair of victories during the weekend at Watkins Glen (N.Y.) International.
Louis-Philippe Montour’s effort equals the four straight victories by Ben Keating at the start of the 2012 season, which served as a springboard to a second consecutive series title. Montour’s performance also wiped away the disappointment of his 2012 visit to The Glen when mechanical issues nixed his quest of a second-place finish in the season point standings.
Montour is coached by Kuno Wittmer who drives for SRT Motorsports in American Le Mans Series competition. Wittmer is pleased with the progress of his young driver.
“I’m really proud of the way Louis-Philippe drove this weekend,” Wittmer said. “He’s talented and listens very well to instruction. Over the past year, he has not only gotten fast and better behind the wheel, but most importantly, he has matured.”

A BREAKTHROUGH FOR AUTONOMY
When you start thinking about breakthroughs in autonomous technology, I bet you’re not picturing a 19-year old high school student. But that is exactly what happened at the Intel International Science and Engineering Fair. A student from Romania developed an affordable artificial intelligence system for autonomous vehicles. He uses a webcam to pick out things like curbs and lane markers, and a low-resolution 3D radar for larger objects like cars and people. His system costs $4,000 compared to an estimated $75,000 for Google’s. When run through 50 simulations his system worked 47 times and he said he can make it better with a slightly higher-resolution 3D radar.

In America, my father bought me a slot car to race.

In Russia, father is buy son slot in racecar.

Sergey Sirotkin's father says that his teenage son is not too young to make his Formula One debut later this year for the Sauber F1 team.
Sergey Sirotkin Sr. reportedly is at the helm of one of Sauber's new Russian partners that have stepped in to aid the financially troubled F1 franchise. Sirotkin's son, 17-year-old Sergey, plans to make F1 practice appearances in 2013, ahead of his full race debut next season.

Just 5 or so years ago, backmarker f1 teams were taking whoever they could get if they brought the money, but in the past few years it seems they've stiffened the approval for an F1 super license. Going by who's been able to get in the last few years, you need to at least have a win in GP2 (which isn't really that hard with inverted grids) or maybe a top 3 or so championship finish in Renault 3.5, or championship of a lower series which gives you a free pass.

So he needs to run Renault 3.5 next year and win the championship or at least finish 2nd or 3rd, or go to GP2 and win a race. Once he does that we'll see him in F1. I'd be very surprised if it happened for 2014.
My racing blog: aracingdream.com
Top

The other kid, I haven't even heard of or found anything about his background. The viper series thing is not really that competitive, so I doubt he's really anything special.
My racing blog: aracingdream.com
Top

ra64t wrote:The other kid, I haven't even heard of or found anything about his background. The viper series thing is not really that competitive, so I doubt he's really anything special.

I'd say he's special for an 18 year old - prolly running on raw talent at this point, given where he is on the experience curve.
'08 Jeep Liberty 6-Speed MT - "Last of the Mohicans"
Top

“It was going really well and I was having a lot of fun, and then it started raining,” said McMurry, who races in the IMSA-sanctioned Cooper Tires Prototype Lites powered by Mazda series in the U.S. “I spun going through the left [turn] in The Esses [which is near the beginning of an 8.469-mile lap at Le Mans], because I still had dry tires on. Then, I had to get all the way back going, like, 40 miles an hour around the entire track. It was just crazy out there in the rain.”
Think about that for a second. Here’s a 16-year-old kid in his first driving stint in his first 24 Hours of Le Mans – from Phoenix, where it almost never rains – who has been tasked with coaxing a prototype race car with slick tires around a nearly eight-and-a-half-mile circuit without hitting anything.
A somewhat minor spin was pretty good for McMurry, especially compared to a pair of front-running, factory-supported LM P1 prototypes that were effectively eliminated from contention when they crashed during the same rain storm. In fact, not only did McMurry manage to not hit anything, he got quicker as his stint continued.
“It’s probably rained more here [in the last hour] than it did all year in Phoenix, so I don’t have a lot of experience,” McMurry explained. “But they were saying I was running close to the leaders’ times in P2 at the end of my stint, when it was sort of mixed conditions.”

From Autoline daily:
AGE IS ONLY A NUMBER
Do you remember what you were doing at age 17? I do, and it was nothing like what 17-year old Max Verstappen is about to do this Friday. He will become the youngest driver ever to take part in a Formula 1 race when he hops in the cockpit for Torro Rosso at the Japanese Gran Prix. Some of you may remember Max’s father Jos, who used to race in F1 for Benetton. But his son Max is more than 2 years younger than the current title holder for youngest-ever F1 driver, Sebastian Vettel. 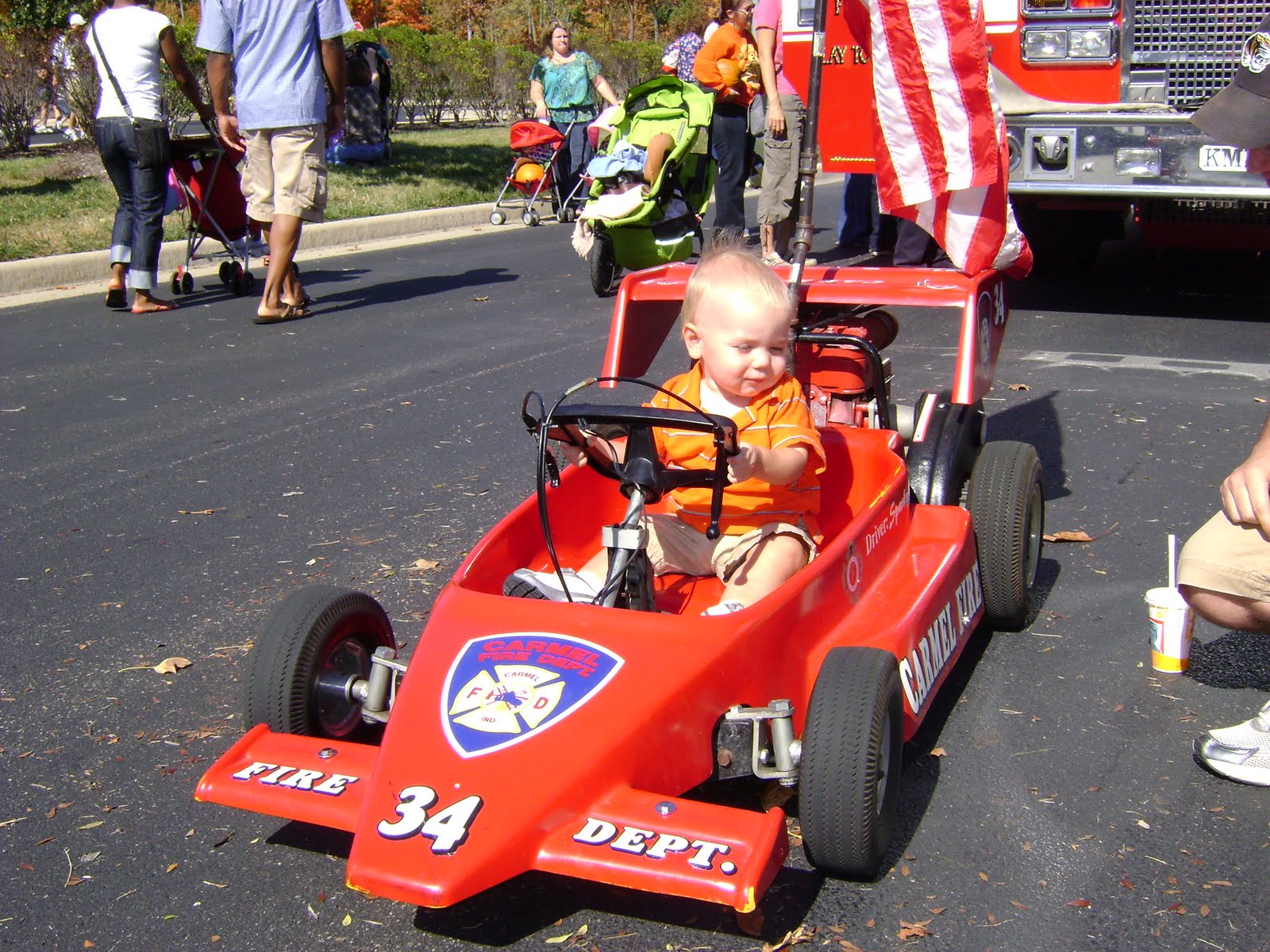 I'd have been a formula racer, but I was breast-fed.
'08 Jeep Liberty 6-Speed MT - "Last of the Mohicans"
Top

Max Verstappen could be a trivia answer in Formula One as both the first and last 17-year-old to start a F1 Grand Prix. That is because, following the inexperienced Dutchman's controversial signing by Toro Rosso for 2015, the FIA is clamping down on the requirements for obtaining a mandatory Super License required to compete in F1.

Verstappen, the son of former Benetton driver Jos Verstappen, will be unaffected by the changes, which look set to be introduced for 2016. Indeed, the young driver's preparation for his 2015 debut is already well advanced, and this week he returned to the wheel of a 2012 car for a test session at a rainy Imola track in Italy.

But a driver in exactly the same situation in 2016 would not be allowed to make his debut.

Verstappen, who is not yet old enough to drive a normal road car in his native country, - See more at: http://autoweek.com/article/formula-one ... i18Cm.dpuf
'08 Jeep Liberty 6-Speed MT - "Last of the Mohicans"
Top

Lego Decides to Go-It-Alone in F1